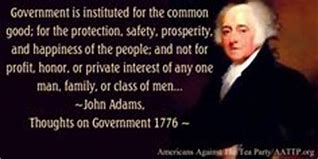 Frederick Douglass wrote these words in 1854 to awaken the consciousness of a nation about the injustices of slavery. I repeat his words here to awaken the consciousness of all elected officials about the ongoing injustices, incongruity and total disregard members of Congress display for their constituencies while at the same time catering to the whims of their parties.

And now it seems, we have reached the nadir of ineffectual government, the longest federal government shutdown in the history of the county.  The situation is unfortunately having significant detrimental and long lasting effects on the hard working people who have elected these officials, in good faith, to work to make their lives better.  And all Congressional figures can do is play the blame game with nary an eye cast nor thought given to the unintended consequences of their actions. If they truly cared compromise would have led to a solution long ago.  Instead of compromise, Congress has blatantly and unforgivingly cast their constituencies aside in favor of party politics and advancing agendas that the majority of people don’t favor.

While there has been some apparent effort to resolve the current debacle, these efforts have resulted in nothing more than shallow photo ops designed to make our elected officials appear to be concerned.  However, these efforts attempt to address the effects of the problem and not the cause of the problem.  Members of Congress seem to  have forgotten why they were sent to Washington in the first place.  They choose to blame the other party, other interest groups, any other entity rather than themselves.  Why?  It is easier and less painful that way and they believe it will help them when reelections roll around again to extend their political careers.

Why is it that most of Congress and many elected officials at all levels of government do this?  Because a critical, introspective behavioral self-examination is the most difficult undertaking individuals, boards, organizations and most importantly elected officials can do.  If elected officials would reexamine the fundamental purposes of a democratically elected body of government, refocus on the obligation of serving ALL constituents in their jurisdiction, perhaps they just may discover that they are the problem. Such a discovery may facilitate and clarify appropriate solutions. Many elected officials exhibit three behaviors that prove to be particularly troubling that lead to ineffectual governing not only in Congress but at state and local governments as well.  These behaviors are: hypocrisy, conflict of interest, and power.

Hypocrisy – Hypocrisy is defined as the practice of expressing feelings, beliefs, or virtues one does not hold or possess.  Hypocrisy manifests itself in many ways.   Hypocrites publicly espouse support for a project or concept yet refuse to embrace it when presented an opportunity in their own positions or lives.  Hypocrites support reform to gain an office, position or status, yet reject it when entrenched in that position.  Hypocrites presume to work for the benefit of their members or constituents, yet self-promotion and personal agendas consume their energies.  Hypocrites outwardly support their colleagues but privately oppose their efforts and seek their demise.

Hypocrisy is unconscionable and vicious.  Once identified as hypocritical, a person loses all credibility.  One is a non-leader in a leadership position. One’s word is meaningless, integrity is lost. Worst of all, as a leader representing others, the pall cast upon oneself is also cast upon those represented.

Conflict of Interest – Conflicts of interest occur when individuals are in a position to influence a decision on policy, purchases or financial operations where they might directly or indirectly receive financial benefit or give improper advantage to associates.

There is a fundamental premise of all elected or appointed offices.  It is that the power of the position is derived from the people for whom it serves.  There is a trusteeship, a fiduciary relationship, created between the people and those who serve their interests.

This relationship is considered so sacred that The United States Senate Code of Official Conduct contains the following declaration:

Elected officials, appointed officials and board members must make their decisions solely based on the best interest of those they serve. People are entitled to feel confident that the power entrusted to their leaders is being exercised for their benefit.

Finding themselves in situations where a decision, a vote or financial arrangement will even remotely benefit his or her private interests, officials must excuse themselves from deciding the issue.  To do otherwise is to betray the public confidence and trust.

Power –Leaders are entrusted with an extraordinary amount of power by those they represent.  This is a basic tenet of a democracy.  Leaders will make decisions and create policy that will affect everyone and not just those of their own party.  Expectations are such that empowerment will effectuate benefits for public good, that representatives will act only in the best interest of all those served.  The responsibility is tremendous, the expectations are at times unrealistically high, and the pressure to perform is enormous.

Abraham Lincoln once said, “Nearly all men can stand adversity, but if you want to test a man’s character, give him power”.  Truth be known, there are far too many elected officials who have failed the test and that is distressing for us all.

Why?  Because some who are entrusted with power, become corrupted. Their behavior and demeanor change, democratic ideals are forgotten, cooperation is forsaken, serving people is replaced by ordering people, colleagues and equals are now underlings, alternatives are discouraged, discussion and debate are silenced, opinions of others no longer matter.  The old statement, “Power corrupts, and absolute power corrupts absolutely” unfortunately becomes a truism.  We need to recognize that abuse of power, rather than power itself, is very destructive.

This is perhaps the most serious of the problems plaguing Congress today.  Non-cooperative attitudes destroy working relationships, leaving in its wake broken promises, malaise and combative relationships not only in Congress and State legislatures but among ordinary people as well.  Left to fester, these relationships, which serve no one’s best interest, will produce the ultimate outcome, the institution’s demise.

All elected officials at all levels of government need to take a serious introspective look at themselves and answer some questions.  Are the best interests of my constituents being served?  Am I working for all my constituents and not just some?  Am I properly funding my government’s activities?  Am I being fiscally responsible?  Do I truly listen to my constituents?  Are democratic checks and balances being scorned?  Is my decision making in full public view or do I condone backroom political antics?