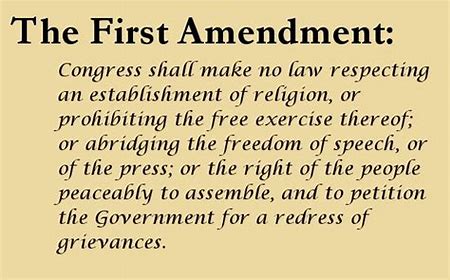 The First Amendment to the American Constitution was written in 1791 and states, “Congress shall make no law respecting an establishment of religion, or prohibiting the free exercise thereof, or abridging the freedom of speech, or of the press, or the right of the people peaceably to assemble, and to petition the Government for a redress of grievances.”  The right of joining with others in protest or peaceful assembly is guaranteed by this amendment and is essential to the healthy functioning of our democracy.

Recently President Trump stated, “I’m all in favor of people protesting if they want to protest.  But don’t protest during our national anthem.”  The First Amendment doesn’t make this restriction.  It’s like saying you can protest but only during the daylight hours or you can protest but only where and when I tell you it is ok to protest.  The reason our founders passed this important First Amendment is to protect our right to peacefully protest – at any time, at any place, during work hours or after work hours.  No one not even the president of the United States has the authority to restrict our First Amendment right to protest.

Then Vice President Pence traveled on the tax payer dime to the Colts game to protest the kneeling of the NFL players.  He told his staff and reporters before the game started that he planned to leave the game if anyone kneeled.  So he was using his First Amendment right to protest – unfortunately it was financed by all of us taxpayers to the tune of $242,500.  Now I respect his right to protest; but I resent that I am paying for his protest.  I didn’t ask him nor all of you to pay for mine.  If we pay for Pence to protest; we must be willing to pay for ALL protests!

The NFL players who are taking a knee are NOT disrespecting the flag or our country; they are protesting the violence against African Americans and the racial inequality in our country today.  The Founding Fathers protest ended in a revolution.  They protected that right for us all.  If the Trump Administration wants to protest, they can certainly do so;  but taxpayers should not have to pay for it!