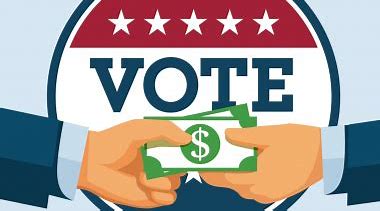 So, who do our elected representatives actually represent? What or who is influencing their decision when they  vote on improving local roads vs. building a new library? When they vote to give billions of our tax dollars to a Chinese company whose interests are on their minds? When they vote for or against reasonable measures for gun safety are they thinking of local students or their gun lobby donors? When they cast their votes who are they representing?

Likewise, when we cast our votes, are we voting for what is best for us or for the interests of out-of-state donors that have convinced us with their TV Ads that they know what is best for us? Are we donor captives like our elected Representatives?

Senator Tammy Baldwin is up for re-election in November. It will be a close race. It will be close, not because she is not representing the Citizens of Wisconsin, but because millions and millions of OUT-OF-STATE dollars are being spent on this campaign.  These non – Wisconsin dollars are trying to influence voters of Wisconsin to support what they want; not what we want. They are saying that they know better than we do, what is important to Wisconsin voters.

Tens of millions of out-of-state dollars are being spent to influence how we vote and in turn, how our elected representatives vote. Do the Oklahoma based Koch Bros. really know what is best for Wisconsin? We must be careful when we listen to or read or watch the campaign ads that are flooding the state. We can truly be “citizens united’ if we as citizens unite and stop being manipulated by outside economic interests

We have the vote and voting is the ultimate voice. We must use it thoughtfully; not waste the opportunity to positively impact the future of this state and the people that live here.

Talk to your neighbors, spend some positive time meeting the candidates when possible, write them letters, call their offices, take charge of the information you receive. Be a responsible Wisconsin voter, not a tool for out-of-state interests.

My suggestion is that we all turn off, zoom though, get up and get a glass of water, or something like that whenever a political commercial comes on the TV. We don’t need to sit and watch. We shouldn’t waste our time on that nonsense. What is happening is scary, but we do have the power to make things better. Do you really want to wake up the day after the election to the news that the Oklahoma Koch Brothers or Illinois billionaire Dick Uihlein have selected your Wisconsin Senator?